It kind of started Thursday when my digestive system began to run amuck and I had clients to see, dance practice I wanted to attend and a busy Friday the next day.  But it all flowed okay-ish so on life goes…
The next morning, I had another round of not feeling great, but I don’t have that cold/flu that’s going around, so I figured, buck up buttercup, and get ‘er done.  Saw clients, had my sewing helper over and one final meal of beef that she brought out of the kindness of her heart <sadly, a greater than normal consumption of beef is the suspected culprit in my digestive adventures>
And Friday evening ended on the futon, rumblytumbly, but relaxing as I had 2 more clients due Saturday morning.
I got up early Saturday, feeling worse again, and managed to get some last minute work done, clients met and sent on their way and then I was able to relax and sleep and let my system empty itself out of it’s burdens.
Sunday morning, sleeping in, typing out the Dancer’s News from bed in order to stay there as long as possible and then off to a tea and toast brunch at our Bollywood For Fun Brainstorming Brunch < which went very well!>.
So really not actually a  totally crappy weekend, just an undercurrent of not feeling great throughout.
Final socializing involved a trip to the Hubby’s fave pub to visit with the in-laws before coming home to rest some more – I had had a very busy morning.
Since Hubby had work to do, settled into the bedroom, listening to my audio book du jour – Terry Goodkind’s, Wizard’s First Rule, and after what seemed like only a few minutes, I was already dozy, snoozy and generally half asleep with a little Sprocketdog curled up with me. Ah, peace.
Calmly, Hubby steps into the bedroom, ” Don’t panic, but get ready to go.” and he steps out again. Once the door had opened, I then heard the hallway alarm going off.  Had I fallen asleep, and Hubby gone out, I likely would have been rescued by a lovely Ottawa Fire Fighter, but I’m ok with the turn of events as they happened.
I looked around, unplugged my phone, turned off the audio book and headed to change into outside pants < was wearing pj bottoms, ya know> – I took the “don’t panic” as a good guideline. Pants, socks, dog, coat, laptop, boots, dog onto leash with her coat, Oh crap!
And yes, I made the choice to walk down the hallway to grab the two wedding dresses of clients who are getting married/ heading off to get married within the next week.

True Story: One of the brides was actually happy that her dress was staying for some minor final adjustments as she did not want to leave it at her mom’s – her mom has a fireplace and it would end up with a wood smoke smell… seriously.

Back to the adventure.
Dresses in a large tote bag, dog on leash, husband with laptops, coat and boots and scarves and off we go.
Hubby left the apartment door unlocked- this is a good idea – fire folk have to go and check every unit, so would you not rather they be able to walk in and do their job without delay or sledgehammer?
Oh, and BTW, the entire time before he changed into his outside pants, Hubby was on the phone with 911, then he hung up as the sirens were blaring. Silly us, we both put our phones down to change and left them in the apartment. Priorities were all good though.
We were leaving the apartment and down to the outside door as we could see smoke coming from our neighbours door in the basement. Hubby had already been knocking on all doors, talking to neighbours and making sure everyone was ok and out.
Anyone who has heard me talk of the “superintendent” in the building knows he’s not really up for the job, and sadly this was another moment of reflecting that.  Everyone in the building was out, except for him, and fortunately, he opened his window which is at ground level and a fire fighter pulled him out.
His comment was that he thought the landlord was there testing the alarm system, until he opened his own door into the hallway and saw the smoke from the other apartment.
He had no shoes, no coat, but the fire fighters popped in when it was safe for them to do so and got him shoes and coat.  His cats were fine, but ere left in the apartment the entire time.
Be prepared people. You just never know.
Meanwhile, I had tossed the very important dresses into my car, moved it back out of the way as much as I could, left the dog in the car too and spoke with the police to help make sure that everyone was accounted for.
Hubby was checking on the neighbours, we got to know them a bit more – but never a good way for this to happen.
Street blocked, multiple emergency vehicles including police, paramedics, fire trucks and on King Edward, an OC Transpo bus was there for us to wait in and keep warm. Ottawa’s emergency services do a great job.  There may be situations where people are injured and sadly die, but based on the quick response we received and the communication and care given – the Red cross and Salvation army were also in play, especially for the couple who cannot go back into their home until that’s cleared.
So, thank you Ottawa services. Thank you neighbours who also came out to see what had happened and offer us a place to stay and anything we needed. Thanks friends on Facebook who checked in after seeing our first post, and again making generous offers. And thanks Mom for emailing 🙂
We are fine. We’ll have to deal with the smell in our apartment, but I have to wait to see what the landlord does in the hallways as it just keeps drifting in.  Windows open while they can be, and laundry pile growing for when it feels like we can wash stuff without having to wash it again – hopefully later today< Monday>.
And so ends a sort of crappy weekend, but it could have been very different, so I’m grateful for my Awesome Hubby, and my snuggly doglet. and for all of you. 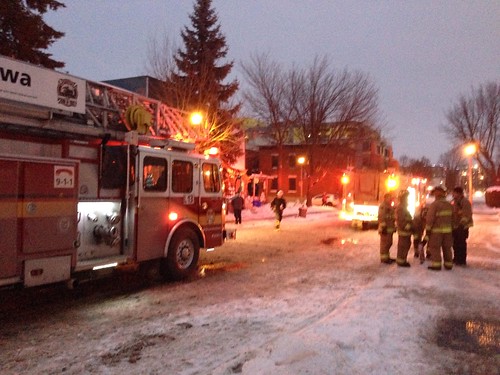 UPDATES:
Monday – the cleaning crew arrived with this: 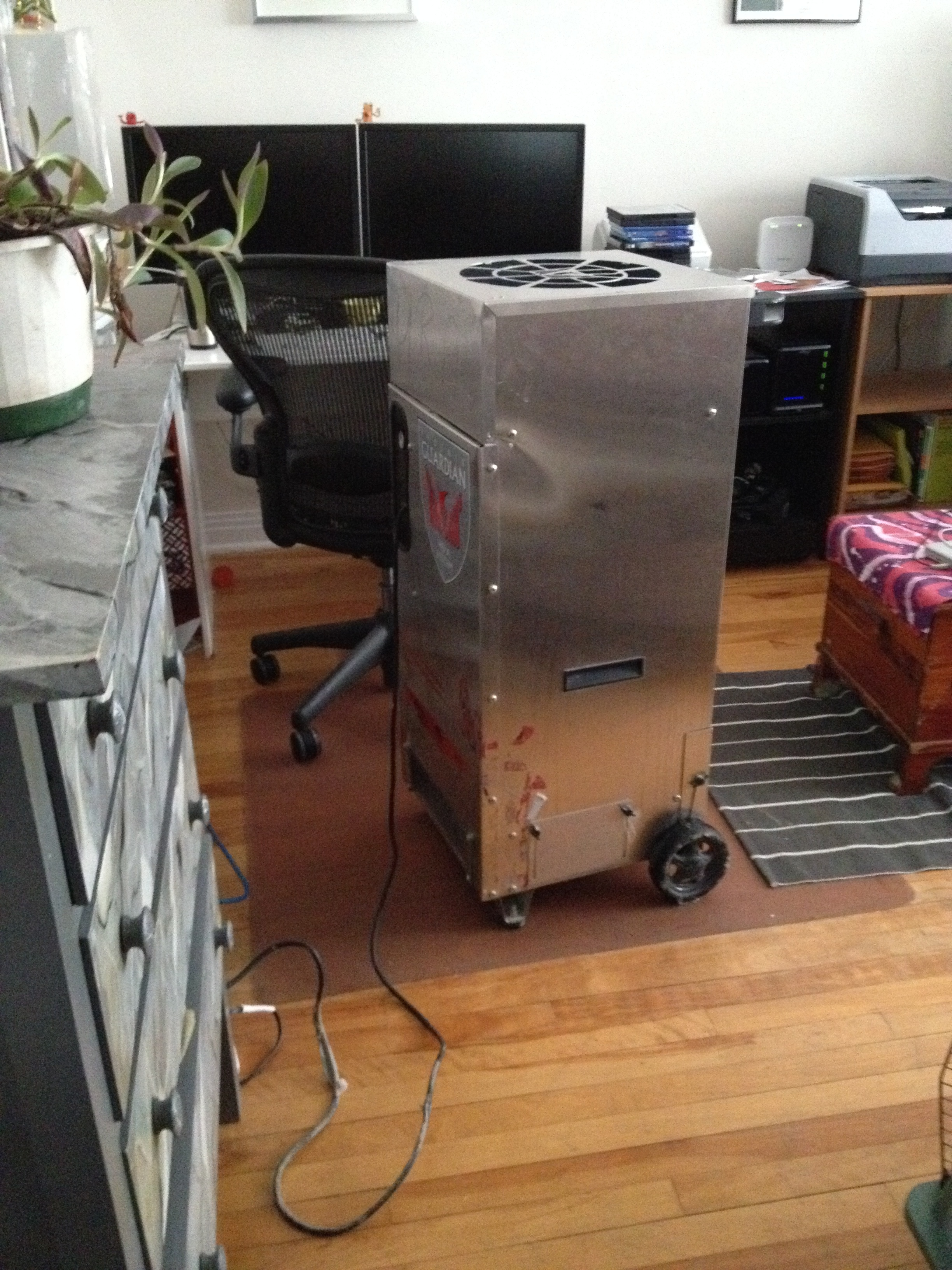 and told me to run it for 3 days…and it worked.
Tuesday: I’m given the gift of calm – thanks to Laura for her thoughtfulness …

Wednesday: They are back cleaning the hallway. I’m taking a lot of today off, as my Hubby has developed the same symptoms as I had last week so I am hoping he feels better before Friday!
If we can make it out:
1 We hit the Museum of Nature for Nature Nocturne – there will be both Anime < for Him> and Ping Pong < for her> in celebration of the Year of the Goat!
Then on the way home, we hope to pop in on the Fundraiser set up to help out our neighbours who lost their apartment: Help get Kitty a home