Mom is having a significant birthday in a few days, and for scheduling, the BIG PARTY was this weekend.

I offered to make her dessert. Upon asking her what she wanted, her quick response was Black Forest Cake – I got this!

We have a few varied dietary needs withithn the family realm though and so I also offered to bring something non-dairy/gluten free as a side snack for those folk.

Another awesome baker in the family, Sarah, offered to make a cake as well to cover the full-on healthy desssert option. Her cake is amazing:

My plans: cake, moulded roses as an accent, and a variant on my granny’s butterscotch cream pe – meringues …and then I went way off road for this “variant” – maple curd 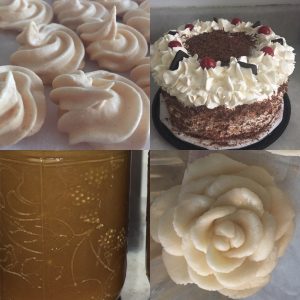 Once the alyers were baked, I shaved the domes off the layers to make them flat. Assemble: layering cherry pie filling on the bottom layer, then filling and whipped cream on the 2nd layer. Cover with whipped cream in the style of your choosing and sprinkle the shaved chocolate and few saved cherries on top to make it pretty. 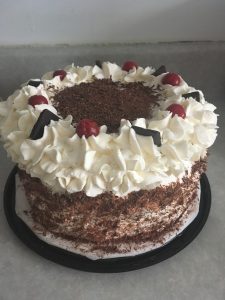 Whip it up good, pipe onto parchment lined cookies sheets and bake for 55 minutes at 250 degrees, then turn off the oven and let them sit for another hour or more. 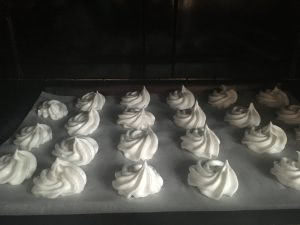 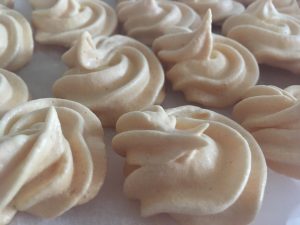 In a sauce pan, mix together really well:

Then add and mix all together

Cook on medium heat until it boils and stirring constantly let it reach 105 degrees on a thermometer – maybe higher would have been better – that’s just what I did.

In a small bowl, beat

Then pour some of the hot syrup into the bowl, mixxing to heat up the egg yolks, then pour the mix back into the sauce pan and let cook for another 5 minutes.

Bring off the heat and add

Stir well and pour into mason jars. Cool and store in fridge. Shake well before using. 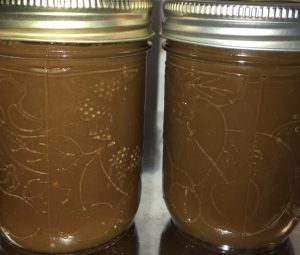 This created a sauce that was drizzled over the meringues – giving a light sugar kick without dairy or gluten – but does have eggs.

Based on the method from my previous post about using moulded chocolate, I once again melted the chocolate and added the honey, then covered it with plastic and let it chill on the counter for a few horus while I did other stuff.

After kneading the chilled chocolate, I then played witha few ways to create the roses.

The first one was made by shaping small bits of chocolate into flattened petal shapes, but they had a lot of length to them and I wouold cut it off at the abse after adding it.

For the next one I tried rolling a tiny ball in my hand then squishing it with my thumb to create each petal, and placing them overlaping around a started bud/blob. This worked better and I continued with this method for the remaining ones.

Eventually, with both techniques, it built up a lot so I have to cut off the base on each one so that it was not too thick.

I think I did pretty well for a first time! *pats self on back*