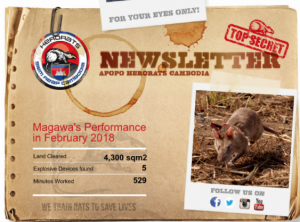 Welcome to the latest Impact Update on Magawa, your adopted HeroRAT. In February Magawa broke his personal best for landmine detection, sniffing out three deadly anti-personnel mines; devices capable of killing and maiming people in an instant. Thanks to your support and Magawa’s intervention, local families in the SraePou village near Siem Reap will be able to live free of fear for the first time in decades, knowing that they can farm their land and explore the local area freely like they used to.

Magawa not only sniffed out three anti-personnel mines, he also discovered another two unexploded remnants of war. The APOPO team have now fully cleared the area and returned the formerly lost land to the local communities living and working in the area.

Did you know? – The National Level One Survey in Cambodia conducted in 2002 found that 20% (2776 out of 13908) of all villages in Cambodia are still contaminated by minefields and/or cluster bomb areas with reported adverse socio-economic impacts on the community. These adverse impacts included restrictions on access to agricultural land, pasture land, forests, and water resources, with 102,778, 105,707, 172,878 and 84,588 families being affected respectively.

ADOPT YOUR OWN APOPO Hero Rat through Apopo.org !